The Viking women attacked their first league meet of the season with vigor on Wednesday at Carillo’s construction zone filled campus. 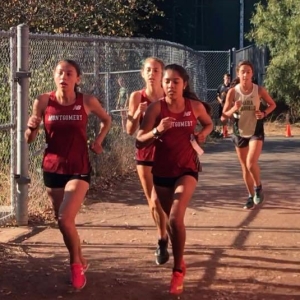 The new “Triple Threat” of Mariah Briceno, Leah Haley and Jasmine Becker paced each other strongly throughout the first half of the race, following closely on the heels of Carillo’s two top women who led the race at the beginning. The remainder of Carillo’s top five and Ukiah’s top runner strung out behind the Triple Threat and just in front of the “Deadly Duo” of Grace Mackey and Isabel Holmes.

Briceno’s strong kick led her to finish first for the Vikings in 4th at the tri-meet, followed shortly after by Technology transfer Haley in 6th, full of pent up energy after being benched for the entire pre-season due to NCS transfer policy. Becker finished immediately behind Haley in 7th.

Mackey had one of her best races of the season for a ninth place finish, catching Carillo’s

6th girl in the chute and nearly nipping their fifth as well. Holmes followed Mackey in 12th to complete the Viking quintuple. Abbey Colvin and Savannah Goshgarian raced well to finish out the varsity seven, completing the win against northern competitor Ukiah handily. While the Viking women fell to Carillo, they ran closer to them than ever before and will continue to chase them down throughout the season.

The rest of the Montgomery team struggled racing the reigning NBL Varsity and JV champions Carillo and northern competitor Ukiah, losing to both. While Fiona Sweet was out with ankle trouble, Maia Fingerlos led the JV girls team, followed by Serena Goshgarian, Jessica Celli, Jessica Dueck and Lulu Devoulin. 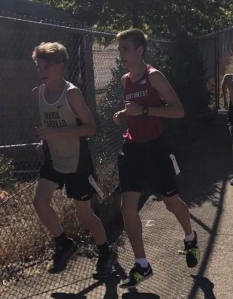 The varsity boys, though briefly crippled by the temporary loss of Brent Oru-Craig and Brandon Alvarado due to illness and injury, still had strong performances from Kyle Theurkauf and Ramon Cruz. Theurkauf led the Viking men finishing in 8th. Cruz came in next, followed by a strong performance from Justin Richter.  Freshmen Sebastian Herbst and Jaden Fernandez stepped in for the missing juniors, with Herbst scoring fourth for the Vikings. Jacob Williams continued to press through his battle with pneumonia to complete the top five. Charles Fisher and Kibby Tesfamichael continued their smart work together to finish the varsity showing for the day.

The Vikings will next journey south to Petaluma to meet strong rival Casa Grande as well as Cardinal Newman for their second league meet of the season.